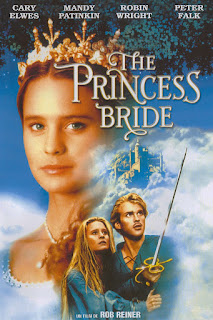 There are a handful of movies that I consider perfect movies. With the ones on that list, I brook no nonsense from critics who nitpick over perfection.  I figured I'd start off my review columns with the best. You'll notice I'm not terribly interested in being current as a critic. My reviews will be more tailored to folk who watch old favorite movies and don't care for screenwriters who don't know how to write an English sentence that doesn't contain nouns, verbs, or adjectives that don't begin with "F".

The Princess Bride, by author and screenwriter, William Goldman, is one of those movies on my perfect movie list. It's one of those where you find yourself quoting dialogue from it at odd times and watching it sometimes when you just need to see the best danged sword fight since Errol Flynn.

And the dialogue was incredible. I steal lines from The Princess Bride all the time. The lines are wonderful.

Buttercup: You mock my pain!
Man in Black: Life is pain, Highness. Anyone who says differently is selling something. 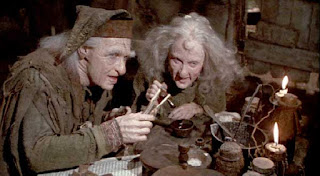 Valerie: The chocolate coating makes it go down easier. But you have to wait fifteen minutes for full potency. And you shouldn’t go in swimming after, for at least, what? Miracle Max: An hour?
Valerie: Yeah, an hour.

Prince Humperdinck: Tyrone, you know how much I love watching you work, but I’ve got my country’s 500th anniversary to plan, my wedding to arrange, my wife to murder and Guilder to frame for it; I’m swamped.
Count Rugen: Get some rest. If you haven’t got your health, then you haven’t got anything.

Miracle Max: Sonny, true love is the greatest thing, in the world-except for a nice MLT – mutton, lettuce and tomato sandwich, where the mutton is nice and lean and the tomato is ripe. They’re so perky, I love that. 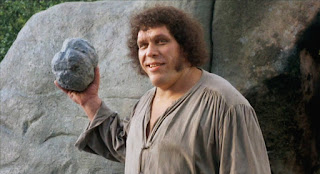 Vizzini: Finish him. Finish him, your way.
Fezzik: Oh good, my way. Thank you Vizzini… what’s my way?
Vizzini: Pick up one of those rocks, get behind a boulder, in a few minutes the man in black will come running around the bend, the minute his head is in view, hit it with the rock.
Fezzik: My way’s not very sportsman-like.

Vizzini: He didn’t fall?! Inconceivable!
Inigo Montoya: You keep using that word. I do not think it means what you think it means.

Fezzik: We face each other as God intended. Sportsmanlike. No tricks, no weapons, skill against skill alone.
Man in Black: You mean, you’ll put down your rock and I’ll put down my sword, and we’ll try and kill each other like civilized people?
Fezzik: [brandishing rock] I could kill you now.
Man in Black: Frankly, I think the odds are slightly in your favor at hand fighting.
Fezzik: It’s not my fault being the biggest and the strongest. I don’t even exercise.

The Princess Bride is written and flows visually like a prose poem. There is a rhythm to it, a kind of song-like quality. The opening and closing are the overture and postlude and carry the viewer into the story, peak into it from outside along the way and then tucks you in at the end. It's the loveliest film I know for when you just want to smile for a couple of hours.
So, bye bye boys. Have fun storming the castle! 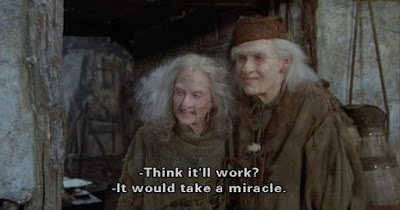 A Little About My Rating System.  I have chosen to use a fruit-based rating system for my reviews. It works like this: 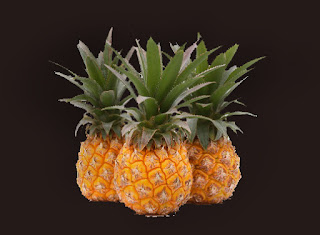 Three pineapples is my highest rating. It is reserved for perfect things - the kind of movies you quote, the foods you dream about, the TV shows you hate to see end, the restaurants you take special people to for special occasions, the music that's high up on my I-pod list. 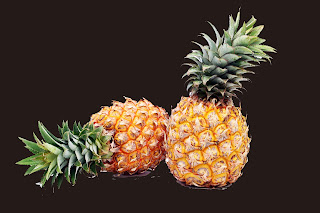 Two pineapples is the rating I give to stuff that's good. TV shows you watch every day. Movies that make you go, "Hey, that's a good movie!" or "It's Monday! The John Doe Show." 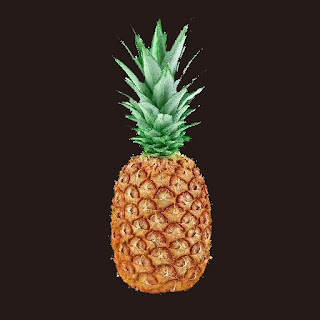 One Pineapple is "the evening wasn't a total waste rating. Things with this rating are good for a one-off, but no great loss if you miss a movie, a TV series it's no big deal. It's a restaurant that's okay but maybe a little expensive for what you get. These are everyday pleasant books and movies and TV shows. 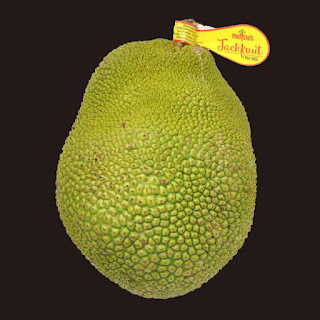 Jackfruit. This rating I give to stuff that you kind of go, "What the heck was that?" You didn't not like it, but you don't know if you liked it either. So that sort of stuff earns a jackfruit - which nobody knows what it is. 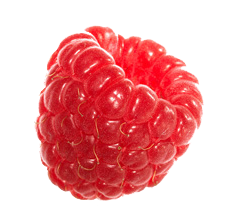 One Raspberry is something I don't really like, but I don't really hate it either. It's just not my cup o' tea that's all. You might like it and I'll probably find something nice to say about it, but it's not something I'll ever go back to though I might sit through it with a friend or loved one if they like it. 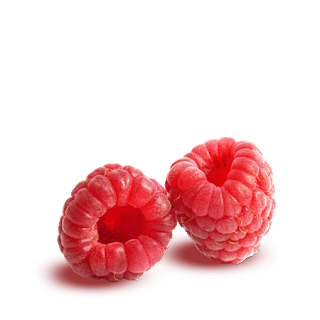 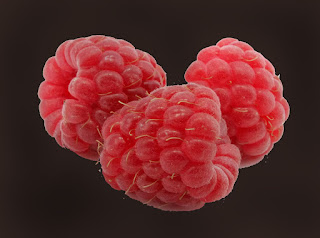 Three Raspberries is the special rating I give to things that really hack me off. This rating is reserved for things that clearly bear the mark of Satan. Seriously, though, to get 3 raspberries, it probably has to be the product of a communist or a terrorist operation.

I know a fruit-based rating system is unusual, but everybody does stars, thumbs up or down, and that sort of thing. Since I'm not limiting myself to movies or television, none of those industry symbols like film reels, cameras, or spotlights really lend themselves either. Raspberries have a certain connotation to them and I like pineapples and I don't know what in the heck a jackfruit is supposed to be, so I figured I try a six point rating system based on fruit.

So why a review blog?  That's because I'm congenitally opinionated and rather than waste reviews on the comment section of Facebook, I'm going to see if I can earn a little ad revenue..  Now if I want to shoot my mouth off I have my own personal shooting range.
How cool is that?

Email ThisBlogThis!Share to TwitterShare to FacebookShare to Pinterest
Labels: The Rating System


"BETTER NEVER MEANS BETTER FOR EVERYONE"

I've resisted watching this TV series since they started advertising it on Hulu. It's been nominated for something like 13 Emmys. That should have been my first clue. They've been running promos for it for months and what I saw I did not like. So let me be up front about it. I came into this show with more than a little prejudice against it. The wife wanted to check it out, so we did.  It was exactly what I expected.

Here's the bullet point backstory.
Joseph Goebbels would be proud of the producers of "The Handmaid's Tale".  That's some seriously sneaky propaganda going there. The idea that is being promoted here is this.  Christian conservatives have apparently decided to overthrow the government and set up a strong oppressive central government that deals in human trade. In doing so, they have apparently adopted Saul Alinsky's Rules for Radicals in a twisted sort of Westbrook Baptist Church sort of Facist Nationalism. Note this, like Hitler's version is not called socialism, although it bears all the earmarks of socialism - gulags, stormtroopers, oppressive government, militarism, uniforms, propaganda and fear tactics. They accuse the obviously conservative oppressors of abolishing the constitution and the rule of law, which is, of course, and Alinsky tactic used frequently by the left.With the slave trade and all, it looks like the Democrat South won the second Civil War, except it's couched in conservative/libertarian memes.

The main protagonist is the quintessential oppressed female. In the opening sequence, she and her black boyfriend and their child are pursued by paramilitary soldiers. The boyfriend is shot, the child stolen and she is taken to the women's cow barn to serve as breeding stock. She is pale, thin, and they make up her eyes with dark circles under them so she'll look like one of those abused women from Auschwitz.

It's a feminist/liberal fantasy of how oppressive a male-dominated Christian society would be.

Moral of the Story:  This is what it will be like if we don't oppress these awful Christian right wingers first. The only way to achieve the worker's utopia is to rid ourselves of the guns and the religion and the conservative opinions.

The writers of the story are wonderfully dishonest people. The trouble with this kind of story is that it doesn't fit with reality at all, unless you live in a surreal fantasy world, which I'm beginning to believe is where most progressives live these days. Even with one of my favorite actresses, Yvonne Strahovski, who played Sarah on "Chuck", the series falls short. It's absolutely depressing and miserable and insulting to me as a Christian, but the progressive left, unlike if I were Muslim, does not allow me to feel insulted when my religion is maligned.  Catholics and liberal Protestants are given a by with "Handmaid's Tale". They are, after all, progressives by and large.

Women seem to particularly like this show, oddly enough. Even the Christian women being maligned in this TV show seem mesmerized by it. I believe that this is how it happens that we slowly shift the culture toward some really awful ideas and attitudes. How else do you get people to become Nazis, Communists, or Maoists. How else do you get people to stand above a field full of human beings with a 50 caliber machine gun and mow them down row on row or drop gas pellets into a shower room full of Jews.You pound people with the kind of ideas that, true or not, make enemies and not people out of some segment of the population. Hitler did it with the Jews. The progressive left is doing it with the Christian right. Once we reach a tipping point where there are more progressives than conservatives, then the hunt will be on.

It's propaganda like Handmaid, masquerading as entertainment that will do it to us.