Freedom: The End of the Human Condition

This book comes off like a pseudo-scientific version of a David Koresh sermon - one of those all-nighters where the cult leader harangues his followers spending hours telling him he's going to tell them some great and magnificent "truth" and that all these other so-called experts are against him because they can't handle the truth, but if they'll just listen to him, the truth will be explained. Then he never quite gets to the truth and tells you that you'll have to come back tomorrow night and he'll explain the rest of it. Griffiths spends the first two chapters of his book telling you what he's going to tell you and why you won't like it and probably won't understand it unless you read the book two or three more times, but he promises that that in chapter 4 paragraph 7 or something, the truth of the human condition will be explained and will set you free from guilt. Of course if you go to chapter 4, paragraph 7 you'll be treated to another repetitive, name-dropping, collection of confident assertions that the "human condition" is clearly explained or will be in Chapter 8 or was in Chapter 3. And then Griffith sets sail on another of those boundless oceanic sentences from which my college grammar instructor would be hard pressed to extract a subject and predicate from somewhere within the tangle of hyphens (Griffith loves his hyphenated words), semi-colons and parentheticals.

I got the impression that he was leading up to the idea that our natural state was running around naked and not having much sex and living as a cooperative member of the collective. He mangles up a mish-mash of academic sounding references to Plato, Darwin, Moses and a panoply of religious and scientific characters, flinging them at you so quickly and in such a disorganized way, it's like stepping into the mind of someone with severe bipolar experiencing an almost psychotic manic episode. Having two bipolar family members, I recognize the pressured speech and the skirting along the edges of word salad that characterizes the prose in this book, pretending to be academic brilliance.

Hey, Mom, look at all the citations! This must be brilliant because I can hardly read it. Of course, Griffith dodges that problem by starting out claiming that people are so resistant to knowing the truth about the mystical "human condition" which is the root of all our problems, that we may find that we cannot understand what we are reading. (see David Koresh, Reverend Moon, the Mahareshi Mahesh Yogi, Charles Manson, Ervil LeBaron, Bhagwan Shree Rajneesh, Jim Jones and Marshall Applewhite)

I'm not saying Griffith is going to go off and commit human sacrifices, but the style of the book has and website, his array of followers who shout his praises and who actually vow that Griffith's brilliant work is going to "save the world", give me pause. Of course, as a Christian I follow someone who claimed he would save the world (at least the bit that wanted to be saved). I suppose a fairer comparison between Griffith and a similar leader would be to compare him to L. Ron Hubbard. He started out with claims that he could save the world and a scientific sounding book. I tried once to read "Dianetics", Hubbard's book and Scientology's "bible". Hubbard's reminds me a lot of Griffith's work.

Will understanding the "human condition" save the world from war and stuff? I don't think so. Okay, confuse the world maybe, but save it? I'm not sure letting our reasoning mind assent to our stumbling around naked, merging with the collective and following our instincts is going to solve any world problems. Of course, I suppose if the enlightened folk who belong to Griffith's gang of acolytes are put in charge, we won't have to actually think about such things anymore.

This book has a creepy sort of vibe to it. Griffith would say it's because I am in denial and cannot deal with the truth. Jack Nicholson should play Griffith in the movie. Sorry guys, I don't think this awkward and oppressive book solves anything. I just don't. 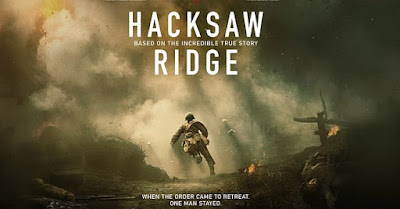 Hacksaw Ridge is the incredible true story of Corporal Desmond T. Doss, a mild-mannered Seventh-day Adventist medic who joined up in World War II as a conscientious objector. Doss rejected the label, calling himself a conscientious cooperator.  His stubborn faith is something we don't see much in this world anymore. His exploits as a medic changed the way the Army utilized medics in the Pacific. Doss actually badgered his commander into letting him go out with his unit. Ordinarily stretcher bearers brought the wounded back to the aid station where the medics would treat them. A lot of guys didn't make it back. By going with his unit, Doss was able to save a lot of lives. At first the men in his unit hated Doss and mistreated him trying to force him out. He stood firm and eventually not only won the respect of his fellow soldiers, but they came to consider him their lucky charm, at one point balking at moving forward without Desmond with them.

I watched several ignorant critics review the movie who marked it down because Doss's exploits in the movie were unrealistic. The truth is that director Mel Gibson actually toned down Doss's history for the movie because he didn't think people would believe what actually happened. A lot of people didn't believe it anyway. Unlike the movie, Doss continued with his unit after the action on Hacksaw ridge and was wounded by the grenade a couple of days later. After he was wounded, the stretcher bearers taking him to the aid station came under fire. Doss saw other wounded men, rolled off the stretcher and went to treat them. He ordered the stretcher bearers to carry the other wounded to the aid station first. While treating the wounded, Doss was himself wounded in the arm by a sniper, bound it up with a rifle butt and crawled 300 yards to the aid station on his own.

It's a story of faith and courage and patriotism, something a lot of this generation's precious snowflake movie critics just don't get. One of the best war films, if not the best war film I've ever seen. I just wish Gibson had shown the rest of the true story - the bit no one would believe. Unlike the movie depicts, Doss fought on Guam and Leyte before he went to Okinawa, earning two Bronze Stars before he won the Medal of Honor at Hacksaw Ridge. A former Japanese sniper who fought on Hacksaw years later told Doss he'd had the young medic in his sights multiple times that day, but every time he tried to pull the trigger his gun jammed. You kinda have to believe in the supernatural to believe that one. I do. He lost his Bible crawling back to the aid station. Months later, in the hospital, Doss received a package in the mail. It was his Bible. His whole unit had scoured the battlefield, with snipers still taking potshots at them, found his Bible and sent it to him.

His unit was remarkable in and of itself. The 77th division fought alongside a Marine Battalion who were so impressed by the courage of the Army guys, they nicknamed Doss's Division the 77th Marine Battalion, a mark of real respect by the Marines.

Doss was protected by angels. Even toned down, the movie leaves little room for doubt that Doss was protected. I do believe the devil wanted him badly. He didn't get Doss though. He came home and lived to a good old age, though disabled by his wounds.

This movie gets 3 pineapples for staying as close to the truth as any recent movie based on a true story.  Good for you Mel.