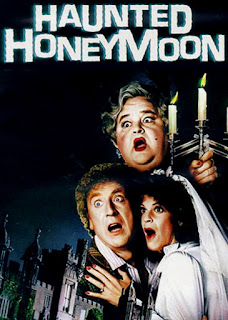 The critics hated this movie, calling it "unfunny" and saying even Dom Deluise couldn't rescue it. Well, of course the critics didn't like it. There is no nudity in "Haunted Honeymoon". There are no grisly murders, no zombies, no vampires, and not once does someone use the "f-word" as an adjective.  It's a sweet silly romp with Gene Wilder, his irrepressible wife, Gilda Radner, and Dom Deluise. It's a story within a story possibly within a story and it's one of our favorites.

My wife and I simply love this movie and we watch it every Halloween along with a couple of other great old movies that I'll be reviewing later in the days leading up to the 500th anniversary of the day Martin Luther nailed his 95 Theses to the chapel door (October 31) and gave the Catholic Church the heebie geebies for the next half a millenium. We are not fans of slasher films and avoid them at all cost. Unfortunately, at Halloween there's hardly anything else, so we watch the same three films every year with three of the funniest people ever - Bob Hope, Abbott & Costello, and Dom Deluise. Who needs to be deliberately frightened? Not this little black duck! 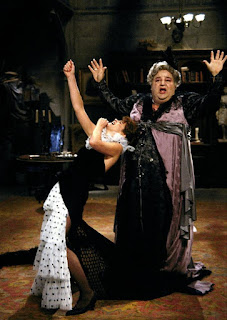 If you're a person who likes your movies clean and fun, this one is for you. It is guilt-free. You don't have to put a bag over your kids' heads even once during the movie. My favorite bit is the dance number with Gilda Radner and Dom Deluise in drag doing a wild version of Ballin' the Jack. The humor is not raunchy or mean and if you can bring yourself to laugh at screwball comedy without the aid of obscenities and bare behinds, you'll enjoy it.

It's a Halloween tradition with the Missus and me. It gets three pineapples from me. I don't care what the critics think!