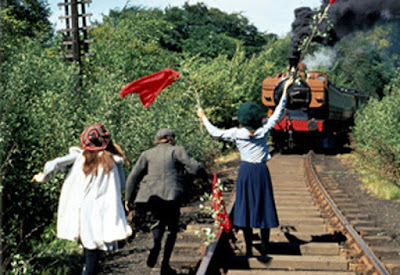 If I read a story to children, I want it to celebrate the goodness in people and I want it to have a happy ending. Elizabeth Nesbit's grand old story does all that. Some 21st century readers are kind of harsh in their criticism of these books. It's not layered with enough socialist principles, feminist ideals or criticism of all things corporations to suit them. The criticism is that the story is not "realistic".

With children's books, I will always allow a trip to fairyland idealism for the sake of the kids. Better they grow up on ideals than harsh realities in their bedtime stories. Let them learn the ideals first and when they are adults, they will have the ideals against which to judge the rightness of the harsh realities.
I wonder sometimes if part of the reason so many successful businessmen seem so hard-hearted is because we have been propagandized by a generation of literature that inevitably characterizes them as evil and hard-hearted. Perhaps they merely oblige us, given that we expect them to be so horrible and rotten. Wouldn't it be better to expect more rather than less to whom great wealth and responsibility has been given? The kindly capitalist may be a myth in this day and age, though having met a lot of them in my work in philanthropy, I doubt this caricature is entirely accurate.

Remember what we all learned from Joseph Campbell. Myth is the great teacher. Perhaps we should enlist our myth-telling powers to lift up and inspire rather than to tear down and vilify. Especially in children's stories, I wonder whether or not we shouldn't expect more of our leaders and our successful people instead of settling for the old saying, "With the rich and powerful, always a little patience." Maybe we should stop being shocked when they turn out to be kindly and go back to being shocked when they show themselves to be brigands.