Jack Gregson and the Forgotten Portal 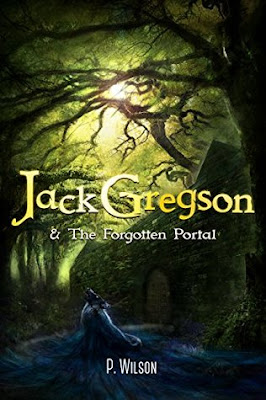 Peter Wilson's debut novel in the Jack Gregson series of young adult/fantasy novels is pretty much standard wander-around-picking-up-magic-stuff sorts of fantasy novels. It comes off like a video game plot. Peter asked me to read and review this because he saw my review of The Chronicles of Narnia. I get a lot of requests for reviews from new fantasy authors because of my Lewis review.

People writing novels that borrow the magical elements like the doors to other worlds and evil witches idea from Lewis and earlier authors of fantasy for children, see the Narnia Chronicles as simple fantasy based on a cursory reading. I tend to disappoint them when I review the books.

Like most YA fantasy novels these days, Wilson's first Gregson novel has all the standard elements:
Magic doors and such were not new even in Lewis' time, nor were magical beasts, puzzles and special children. Unlike Lewis, however, the Jack Gregson tale is less strategic in how it uses these elements to advance the story. Lewis preserves the wonder, the dramatic tension and mystery throughout his tales, but he never makes magical solutions happen by accident. Even the visit of Father Christmas to the Pevensies in "The Lion, the Witch and the Wardrobe" only happened because the witch's power to sustain winter was ending.

In Gregson, the magical stuff strains credulity, it comes so fast and furious. To be sure Wilson is busily setting up the sequels, but he falls prey to the new author's temptation to brush the magical paint in layers that are rather too thick. More is not necessarily better.

If you're a video-gamer, the book probably feels familiar in how quickly the magical stuff pops up and may serve to keep an ADD reader engaged. I think it's a mistake too many books in this genre make in that all that dense magical stuff doesn't encourage the reader to work harder for answers to his or her questions as the story runs along. Notice how slowly J.K. Rowlings advances the plot in the "Harry Potter" novels. If you've wondered why the kids don't use magic to solve every little problem at Hogwarts, it's because Rowlings understands how to use magic sparingly as a plot device. Her characters are deep and nuanced.  I kept hoping the Gregson clan would grow up a little during the book, but their development was unsatisfying.

You could see Wilson learning his craft as the book progressed. If you like this genre, keep an eye on Wilson. I think he could make a success of Jack Gregson. There's certainly an audience for it. I grew up in a different generation with somewhat longer attention spans, even though I have ADHD myself. Millenials probably will thoroughly enjoy these books. It does get a lot of five star ratings.

I'll be interested to see where Wilson goes with his next entry into the Gregson series.